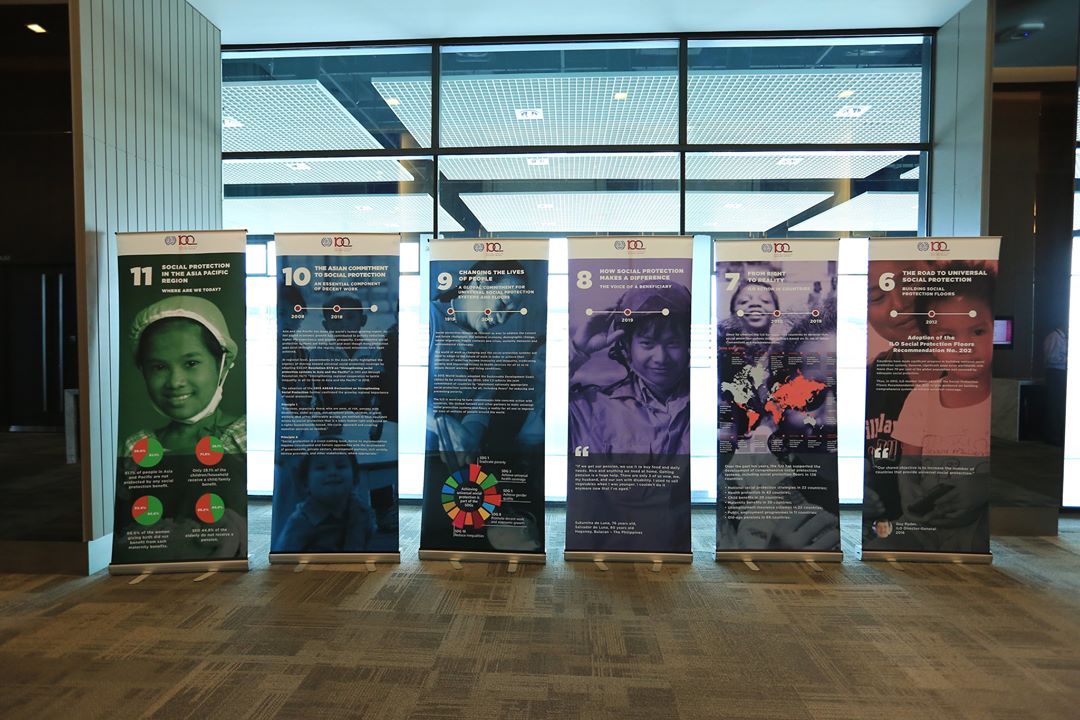 BEFORE THE OFFICIAL OPENING OF THE EI 8TH WORLD CONGRESS

Prior to the official opening of the EI (Education International) Congress in 2019, delegates, invited and honorable guests discussed a variety of topics and approaches related to education.

In his speech he noted:
"Students' potential is being illegally exploited while students are not only future employees but also our future citizens."

Fred Van Lowen emphasized the importance of conducting research in higher education. He pointed out that education is the cornerstone of democracy, though the dangers are not only in ordering privatization and market demands, but in the authorities' inappropriate approaches to academic circles and institutions. The examples are the cases of Italy, Hungary, the Philippines and Brazil.

The examples from the Asia-Pacific region were introduced to the participants by a New Zealand representative. He emphasized the dominance of neoliberal policies and market approaches, which put workers in poor working conditions, including limited academic freedom, and the tendency to privatize education in the region.

The meeting highlighted the situation of European universities, where poor finances, low status of teachers, and lack of readiness for collective bargaining were observed. Employers' organizations’ attempts to reduce the voice of the employees. Consequently, wage increases are inadequate; there are shortcomings in pension systems and long-term contracts. During the discussions it was noted that in the era of technological and social media empowerment, trade union mechanisms need to be strengthened.

A representative from Columbia University also highlighted the challenges in the region. He noted that the biggest problem in the field in working environments was the restriction of academic freedom that teachers are regarded as service subjects.

Topics of discussion at the meeting were the facts of copyright infringement of high-level employees and academic circles using technology. It was noted that after the expiration of their contracts, higher education institutions continue to use lecture video recordings and materials when offering online course services.

Meeting of the Aboriginal Peoples Block- "Our languages have not died, we are dormant, we must revive and preserve them"

At the meeting, about 200 participants discussed topics that are directly related to education issues caused by colonialism. They exchanged information and agreed to take steps to protect the rights of Aboriginal people. It has been argued that the problems caused by the footprint of colonialism related to Aboriginal peoples are found in Australia, the Philippines, Central and South America or North America. Participants focused on issues related to health, traditions, culture, socio-economic conditions, services and equality.

One of the worrying issues of Aboriginal Peoples is the racist and violent outbursts that force school-age students out of school for security reasons. Teachers, for their part, are not able to avoid cases of violence. The block's meeting discussed various examples of violence, including the case of an Australian school principal of Aboriginal origin in a small community, at the door of which a kangaroo was put by someone, making him/her leave not only the school but the profession as well. The participants agreed that they have to work more effectively in order to avoid such cases in the future.

It is worth noting that the term "cultural security" is guaranteed to imply a spiritually, emotionally secure environment and the protection of one's identity. The panelists welcome the newly adopted ILO Convention on gender-based Violence in the world of work, which was assessed as a step forward in combating violence in the workplace.

At the block meeting, during the sessions, teachers as leaders presented initiatives by their trade unions that had positive results in defending the rights of Aboriginal peoples. New agendas, perspectives and the need for alliances, trade union training and capacity building programs were introduced.

The last part of the plenary session was dedicated to.
Discussion about the Education International Inclusion and Participation Format at the 2020 Aboriginal Peoples Education Conference.

On the Education International 8th World Congress of the current ,, higher and further education block '' the new study, ,, technical and professional education-framework agreement for social justice " was presented, which describes in a holistic approach to professional education, which gives better results with respect to human capital theories. In an unsustainable work environment, better vocational and technical education empowers students to be better employed and as individuals adapted to learning processes so that citizens can contribute more to community development.

The authors of the study carried out seven years of work in Argentina, Australia, Ethiopia, Germany, Taiwan and the UK.

The study highlights the need for an opportunity-based approach to technical and vocational education, which is at odds with the current narrow human capital approach. The authors of the study conclude that more efforts are needed to develop 21st Century skills and knowledge to help students become more productive in their workplaces, enable more career advancement, and become more involved in decision-making. Vocational and technical education students know better what society and their development needs, to create a better future together, they are more skilled workers, better citizens, and thus create better social justice.

Before the congress, the Education International held a constituent assembly of the “Education and Solidarity Network.” Together with the EI member organizations, various organizations promoting democratic values are united.

Members of the Education and Solidarity Network share common values, including the creation of safeguards for the well-being and health of representatives of educational institutions that are directly linked to the provision of quality education.

Before the congress, female leaders of education unions gathered. Susan Hopgood, president of the Education International, once again reminded colleagues on the topic of the congress - "Educators and Their Trade Unions Take the Lead."
“We should take the lead-in not us, who?- She urged the female leaders.

“Many of you remember the EI Women's Third World Conference in Marrakech in 2018. The main theme of this conference was leadership in education unions. There we have identified strategies and mechanisms to increase women's representation.” Said she in her speech.

Susan Hopgood emphasized social justice. “We have to work hard to create an equal and inclusive environment and turn the words into actions! We need to be everybody's example… because we are leaders in the pursuit of social justice.” the speaker explained.

“Leadership is an opportunity for everyone, an agenda to advocate for the necessary topics. When working on social justice issues, results are achieved, and social justice must be disputed as an ideology... We need to work and engage in this political game, advocating for grounded argument-based themes. "

"We still have a lot to do," he said, referring to leadership, gender equality, a safe work environment, and discrimination.

He described the victory of the century as the new convention and recommendation adopted at the International Labor Organization Conference in 2019 on Workplace Violence and Bullying.

Diane Volochuk, Chairwoman of the International Committee on Education for Women, presented female candidates for the EI Executive Board to the attendants.

In closing, she urged delegates to use the congressional opportunity to voice and advocate for the challenges women face.