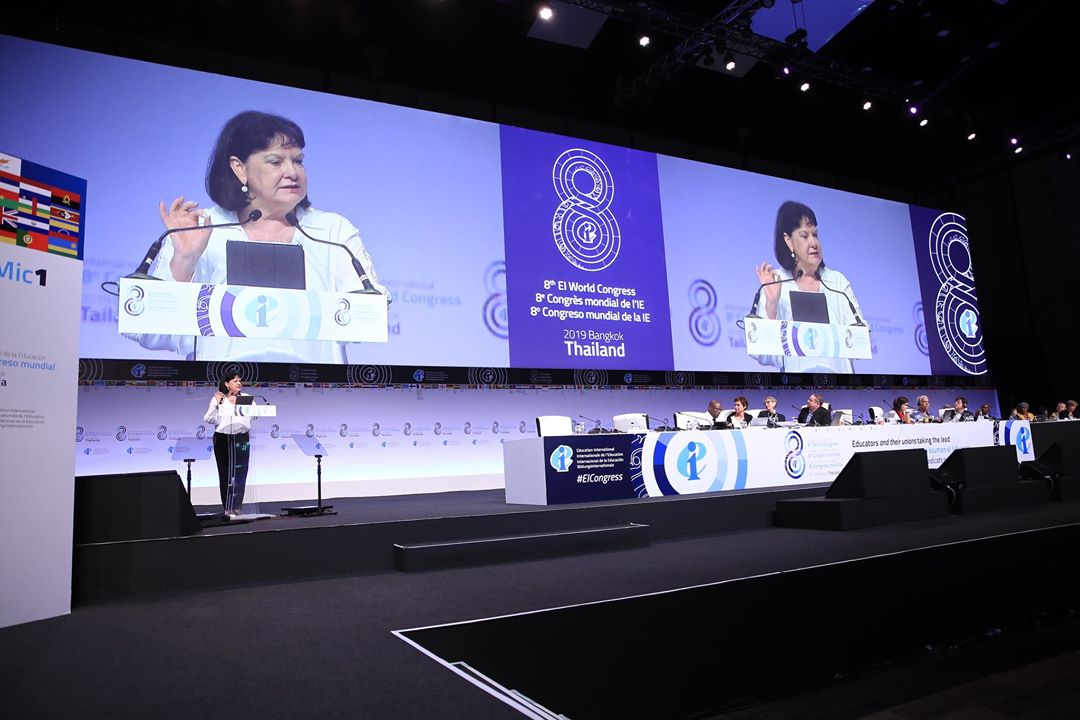 We will change the world with a united effort.

Delegates of the 8th congress of the Education International raised their hopes for justice and were motivated by the speech of the Nobel Peace Prize laureate Kailash Satyarthi. He is a great ally and supporter of education representatives.

At a congress in Bangkok, Kailash Satyarthi started his own speech with a metaphor: "This hall is full of fire and light as you light it up with your spark!"

Kailash Satyarthi was awarded the Nobel Peace Prize in 2014 to commemorate the fight against child labor. For many years he has been conducting various events together with Education International, working for decades to advocate for access to quality education.

Regarding the topic of the congress, the speaker pointed out that it is time for action, as many challenges arise in the fields of child and human rights, democracy and climate change.

The Nobel Laureate focused on sustainable development in 2015, in particular quality education for all, and noted: “By 2030, one quarter of the children still remain out of schools. The political will is insufficient, and the privatization of education creates an unfair environment. ”he said.

Let us take the lead together!

Trade unions and their fight for justice and equality are welcome for the Nobel laureate, but he emphasized the need to join social movements.

Along with the Education International and other strong partners, Satyarthi collects signatures to support children within the Hundred Million Campaign.

In conclusion, Satyarthi called on delegates to take active action: "You cannot wait for your heroes. You are heroes yourselves ... you can make a difference... you are the leaders!"

Among the honorable guests of the congress was the Director-general of the International Labor Organization (ILO) Guy Raider.

"It is time to be resilient because false facts and false information are spreading." He reviewed remuneration systems globally and clarified ILO labor law, stating that labor is not a service alone "Education, therefore, should not be just a service" it is everybody’s right. Guy Raider highly praised successful work of Education International in lobbying for sustainable education, in particular access to education "It's all a merit of education international and its member organizations" - Education must defend democracy, citizens and fulfillment of common goals, education must be on everyone's agenda” – He announced.

“If you have no facts, you can’t have truth. Without truth you can’t have trust. If you have none of these, there is no public space and there can’t be democracy.”- Noted guest speaker of the congress, Philipino journalist Maria Ressa. She told her own stories to delegates, noting that social media had become the weapon of the authoritarian regime in the Philippines. Many journalists around the world are fighting for the truth.

Reesa emphasized the role and importance of education representatives as teachers teach critical thinking to future citizens, the participation of informed citizens is crucial to democratic processes. We have to stand up against bullies, report the lies because that's how courage spreads.” The congress delegates responded to these words with applause.

Trade unions in the frontline

“Unions are on the frontlines because we share a set of values. We stand for hope, not hatred; rights, not oppression; democracy, not dictatorship; freedom, not fascism; solidarity, not division; trust, not despair; fairness, not inequality; courage, not fear.”- Sharan Burrow said in front of 1400 delegates.

She insisted that “we are prepared to stand up every time we see these values threatened,” and that the solidarity between the global union federations and the ITUC is critical in this regard.

Barrow touched upon topics of democracy and various challenges. She noted that people need hope in democratic processes. In addition to proper growth of GDP, people need to know that their governments are committed to raising their living standards ... for this collective bargaining needs to be strengthened.

“It means quality public services and care, education, health, childcare and aged care. And it means strengthening the human and labour fights of people and engaging them beyond the ballot box,” she noted.

Lastly, she emphasized that this century must be human-oriented and that technologies should serve societies and economies, not vice versa.

“The future starts in the classroom with our teachers.”

On behalf of UNESCO Dr. Jordan Naidoo addressed the congress. According to the theme of the day, he emphasized the importance of highly qualified teachers, for meeting the Sustainable Development Goal 4 by 2030, namely inclusive and relevant quality education and lifelong learning for all. He cited not-so favorable research statistics, adding that the world could not meet the set goals.

“On current trends, 220 million children and youth will still be excluded from school in 2030 and one in three young people will not complete secondary education. Despite progress, many countries are still far from achieving gender parity... This is an education crisis created by the lack of political commitment and attention to address inequality and questionable quality,” stated Naidoo before the 1,400 delegates from around the world.

He spoke about quality and added, that the education system is failing to deal adequately with the challenge of inequality and the 2030 Agenda’s commitment to leave no one behind... Inequality related to social disadvantage, gender, disability, migration or geographical isolation."

He called for more policies, data processing and finances in response to existing challenges, as "education is the right."

"In order to attract good staff into the profession, it is necessary to create better remuneration structures, improve teacher status, develop policies and support systems for teacher professional development."

"If we want the future as the world leaders and young people want it, we need to start acting from classrooms with students and teachers," said the speaker.

Video-address to the Congress of Amanda Mohammed , Deputy Secretary-general of the United Nations, was also worth noting

The main message of the congress was universal free quality education, protection of human rights, unity and the protection of the teaching profession. Amanda Mohammed remarked:

"We all know what provides quality education, the support of teachers – the ones on the front lines of education and the guarantors of performance for Sustainable Development Goals by 2030." She thanked all the teachers for their hard work.

Advocating teaching profession for the future

The congressional delegates discussed the resolution for the” Promotion of Professional Prestige" based on the EI and UNESCO Global Framework for Teacher Profession Standards, Future of Teaching Profession, Teachers’ Well-being, Academic Freedom for Higher Education Workers and Support for Interests of the support staff.

Delegates of the congress were divided into four working groups to discuss the topics regarding development and support of the teaching profession:

The first roundtable of the young trade union activists was held during the congress.

Union activists under 35 have devised strategies for a new trade union effort. They have presented their recommendations and opinions to senior generations and delegates, which will help to unite young professionals in the trade union movement and gain their trust.

The 8th World Congress of Education International, which brings together 32 million education representatives from more than 170 countries, has expressed solidarity with women representatives of the US Congress.

The resolution was unanimously introduced by the American Education Unions in response to President Trump's destructive and dangerous actions. President Trump has again made a sexist attack on four newly elected female congressmen.

But congressional delegates once again called on the president to refrain from racist, xenophobic and sexist statements and not divide American citizens.

1400 delegates have signaled with raised hands that such attacks undermine democracy and pluralism, with education officials always at the forefront of protecting democracy, students' rights and freedom in the classroom and in schools.

It was noted that Trump's actions and public status are a clear threat to democratic ideals and universal rights.

"We see how democracy collapses, the world's delegates are aware of the dangers and rhetoric... We are committed to our American counterparts in their struggle against authoritarianism, racism and all vicious approaches. We will be intolerant together, and we will fight for equality! ”